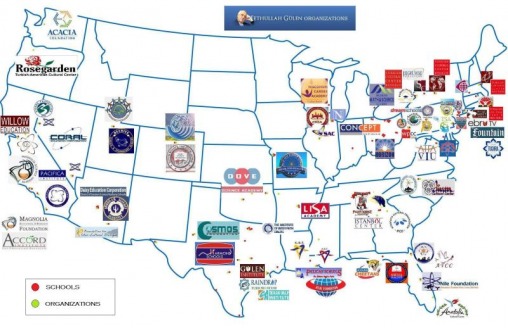 Gulen Empire map from Turkish Newspaper. DISCLAIMER: If you find some videos are disabled this is the work of the Gulen censorship who have filed fake copyright infringement reports to UTUBE

Horizon Science Academy sues Ohio for loss of educational grants from Gulen Cemaat
By Emily Bamforth, cleveland.com CLEVELAND, Ohio -- A dozen Horizon Science Academies, part of a series of charter schools in Ohio, are suing over denied Ohio Department of Education grant money, claiming the rules for the grant were changed after the application process. Three Horizon Science Academy Schools are in the Northeast Ohio area, including the Horizon Science Academy of Lorain and Horizon Science Academy Cleveland Middle and High schools. Twelve schools throughout the state are plaintiffs in the lawsuit, which names the Ohio Department of Education, Gov. Mike DeWine, the state school superintendent and the director of community schools as respondents. Read the full lawsuit in the document viewer at the bottom of this post. Mobile viewers, click here. The lawsuit, filed in the Ohio Supreme Court, refers to the “Quality Community Schools Support Grant” created through House Bill 166, a state budget bill. Community schools are commonly referred to as charter schools, which are operated as public schools but not controlled by a school district. Horizon Science Academies are open admission. If applications exceed the number of spots, students are chosen through a lottery. Under the grant, qualified charter schools are eligible to receive up to $1,750 each fiscal year for each pupil identified as economically disadvantaged and up to $1,000 each fiscal year for all other students, according to the Ohio Department of Education website. Horizon Science Academies officials applied for the grant, believing the schools met criteria. But, according to the lawsuit, the application was denied because of an additional restriction allegedly not part of the state bill or the application form. The independent school boards running Horizon Science Academies contract with Illinois-based Concept Schools NFP. The lawsuit claims funding was denied because Concept is not registered with the state of Ohio as a foreign corporation. An attached letter in the lawsuit from Office of Community Schools Director Karl Koenig describing the denial reads: “Specifically, Concept Schools NFP is not registered as a foreign corporation with the Ohio Secretary of State’s office and, therefore, is not in good standing in Ohio.” Horizon officials claim that information was not stated as a requirement on the application form and when the schools followed up with the state on the application, that issue did not come up as a concern. Horizon also claims that Concept is registered with the state already. The schools are asking that the state approve the grant applications. Ohio Department of Education officials did not immediately respond to a request for comment on the lawsuit. The Ohio Department of Education also rejected other schools, including the for-profit Accel Schools chain, because of issues with corporate registrations. In Accel’s case, some schools that failed to meet academic criteria may have qualified for money because other Accel-run schools received a federal grant, according to previous Plain Dealer reporting. The state claimed that the company’s registration did not link operations in Ohio to other Accel-run schools. Some other Concept-run schools qualified for the money by meeting academic criteria. https://www.cleveland.com/news/2020/06/dozen-ohio-horizon-science-academies-sue-ohio-department-of-education-over-denied-grant-funding.html A dozen charter schools, Horizon Science Academies, including the Horizon Science Academy of Youngstown, are suing the Ohio Department of Education over denied grant money, claiming the rules for the grant were changed after the application process. The funds were to be awarded as part of a two-year Quality Community Schools Support Grant (QSF) which recognizes schools that provide quality education to underserved populations. According to the release from Horizon Science Academies, the lawsuit comes as a last-resort effort after the ODE refused to reconsider its improper decision. The twelve schools are the plaintiffs in the lawsuit, which names the Ohio Department of Education, Gov. Mike DeWine, the state school superintendent and the director of community schools as respondents. Horizon Science's press release said the lack of funding is negatively affecting nearly 4,500 students of the academy. On average, 83 percent of Horizon Science's students qualify for free or reduced lunch. Tim Clements, an attorney with Nicola, Gudbranson & Cooper, said that the Horizon schools met all the criteria of the grant as it was originally intentioned. "The new criterion retroactively used by the ODE, after the HSAs had already applied for the QSF, was not in HB 166 which the Ohio legislature passed when creating the funding," said Clements. "That's why we're claiming that the ODE exceeded its authority under Ohio law when it inappropriately used an undisclosed requirement for HSA's operator to be registered with Ohio's secretary of state to justify denying funding to these 12 schools." The schools’ lawsuit points out that the requirement was never intended by Ohio’s legislature and has nothing to do with the quality education that the HSAs provide to their students. Ohio Department of Education officials has not publicly commented on the lawsuit. https://www.wfmj.com/story/42255343/horizon-science-academy-of-youngstown-suing-ohio-department-of-education
Posted by Gulen is a Fraud at 1:57 PM No comments: 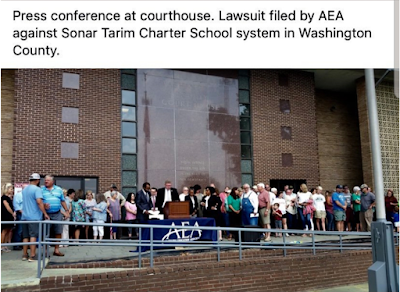 by Larry Lee | Aug 3, 2019 | Charter Schools |
Attorneys for the Alabama Education Association filed suit in Circuit Count in Washington County August 2 alleging that Soner Tarim, the Texan with the management agreement with Woodland Prep, has submitted false information to the state charter school commission on behalf of Woodland Prep in his efforts to establish this charter school.
At the same time Tarim has been working with Woodland Prep he was also trying to get approval to open charters in Houston and Austin.  The AEA court document refers a number of times to the fact that Tarim made statements to the Texas state board of education about Woodland Prep that were untrue.
Some of this included false info about the performance of Washington County public schools, about the level of opposition to Woodland Prep from the local community, about why the application he says he wrote for Woodland Prep did not meet standards of the National Association of Charter School Authorizers, about school enrollment numbers, etc.
As we have been documenting here for months, Soner Tarim is a fraud.
Granted, he could sell Eskimo pies to Eskimos, but he does it with smoke and mirrors and ignores facts.  And the fact that the members of the present Alabama charter school commission allowed themselves to fall under his spell, rather than doing their homework, is also shameful and even more reason members of this group should be replaced as soon as possible.
One of the more incredible pieces of this whole sordid mess is what Tarim told the good folks in Texas about his role in getting state approval for Woodland Prep.  He told, without hesitation, a Texas board member that he wrote the Woodland Prep charter application.  When the board member then asked why this application was rejected by the National Association of Charter School  Authorizers Tarim said this group does not what it is doing.  (I contacted NACSA and learned they have reviewed 500 applications from across the country in the last 10 years.  Yet, according to Tarim, they don’t know what they are doing.)
Then, incredibly, he said that the Alabama charter commission did not know what they were doing either until he showed them how to grade an application.  Alabama had used NACSA to grade applications since the charter law was passed in 2015.  We paid them more than $100,000 for their service.  Of course, Tarim has a ready-made answer for everything and it is ALWAYS the other guy’s fault.
Tex
as has figured out who Tarim is.  This is why on June 14 the Texas state school board denied Tarim’s request to open four charters in Austin.  They have a long history with him because he opened his first charter in Houston in 2000.

As board member Georgina Perez told me in an interview after she voted against Tarim, all he deals in is “alternative facts.”  The people in  Washington County are well aware of this because time and time again he has cited “facts” about their public schools that are fiction–not facts.
Thankfully, AEA has stepped up to the plate.
But had the Alabama charter commission done their work, there would be no need for a law suit.  They would have listened to the national reviewers in May, 2018 and rejected the Woodland Prep application.  But they, and others, were mesmerized by Tarim and failed the people of Alabama and caused months of misery for Washington County.
It is one of the most shameful examples of failed government I have ever witnessed.

Posted by Gulen is a Fraud at 1:12 AM No comments:

Posted by Gulen is a Fraud at 5:59 AM No comments:

Harmony Parent the TRUTH: Soner Tarim to attempt Royal Public Schools in Tex...: Soner Tarim has been a busy man, in the last month he was dismissed from the contract with LEAD Academy in Montgomery, Alabama under his &qu...
Posted by Gulen is a Fraud at 2:39 AM No comments:

The Foreign Agents Registration Act (FARA) was enacted in 1938. FARA requires certain agents of foreign principals who are engaged in political activities or other activities specified under the statute to make periodic public disclosure of their relationship with the foreign principal, as well as activities, receipts and disbursements in support of those activities.  Disclosure of the required information facilitates evaluation by the government and the American people of the activities of such persons in light of their function as foreign agents. The FARA Unit of the Counterintelligence and Export Control Section (CES) in the National Security Division (NSD) is responsible for the administration and enforcement of FARA.
https://www.justice.gov/nsd-fara


Gulen Charter Schools NSD / FARA submittal from Gulen Cemaat
Posted by Gulen is a Fraud at 1:29 PM No comments:

Pacifica Institute - A Gulen Dialogue road show: Sema Foundation of Arizona relationship to Sonoran...: In the usual Gulen welcoming spider web, the Sema Foundation lures people in via free Turkish coffee quesadillas (Turkish flat bread with ...
Posted by Gulen is a Fraud at 2:20 AM No comments:

Posted by Gulen is a Fraud at 2:27 PM No comments:

Gulen is a Fraud
A spy, a parent, a journalist.